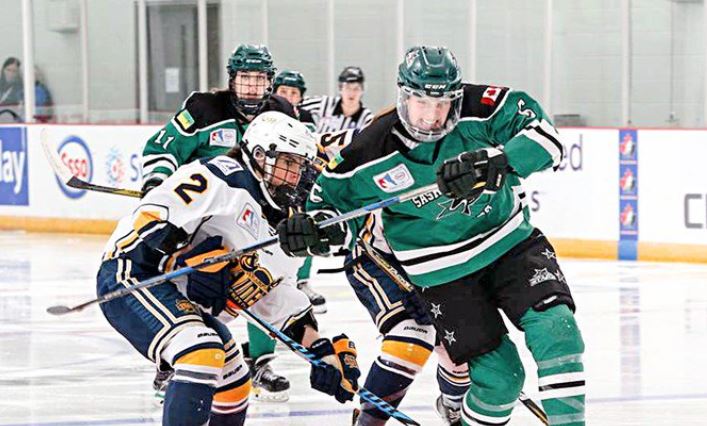 Calling yourself a national champion is some feat and not too many people can call themselves that.

Kiah Vail of Fort Smith, though, can and she has the gold medal to prove it.

Vail helped the St. Albert Slash to the Esso Cup national midget girls championship in Bridgewater, N.S., on April 29 as hey beat the Saskatoon Stars in the final by a score of 2-1. It was a historic win as the Slash became the first team in Esso Cup history to repeat as national champions.

“We had momentum all game but it could have swung,” said Vail.

The Slash opened the scoring in the first period of the final and doubled that lead in the second period but the Stars clawed one back in the third period to make it a nail-biter down the stretch.

But Vail said there wasn’t much of a worry among the girls because they were the better team.

“The message from our coach was to keep on going and play defence,” she said. “It was the best team game we played and we played so well all game.”

It was the second meeting between the two teams as they met in the round-robin as well, a game which the Stars won, 4-1.

Vail said the final was a much different game than the round-robin meeting.

“The first time we played them, it was fast and very physical,” she said. “We expected that this time but they seemed like they were really tired. They weren’t skating with us in the final and we weren’t expecting that at all. Our coach gave us a great speech before the game and inspired us to do it and we left it all out there.”

The Slash played the Brampton Canadettes from Ontario in the semifinal, which they won by a score of 3-2 in a shootout, a little longer effort than the Stars needed to win their semifinal, but Vail said there was never any worry about fatigue at all.

“Our conditioning was good going into the tournament,” she said. “That being said, it wasn’t our best game against Brampton.”

The final game was broadcast nationally on TSN and Vail said that made things feel like the real deal.

“That made it awesome,” she said.

The celebrations on the ice were as expected but in the dressing room, it was a different story as the players all took turns talking about the season and the win.

“We just sat around and it was such a bittersweet moment,” said Vail. “We’re losing all the third-year players because they’re all moving on to their university teams but they got to end it with a win. It was such a long road to get here and it was such a great atmosphere after it was over.”

While the games are over, the preparation for next season begins as the Slash are having an identification camp this week.

As for Vail, she will be working out four days a week over the summer.

“I’m hoping to have more of a leadership role for next season,” she said. “The work never stops.”